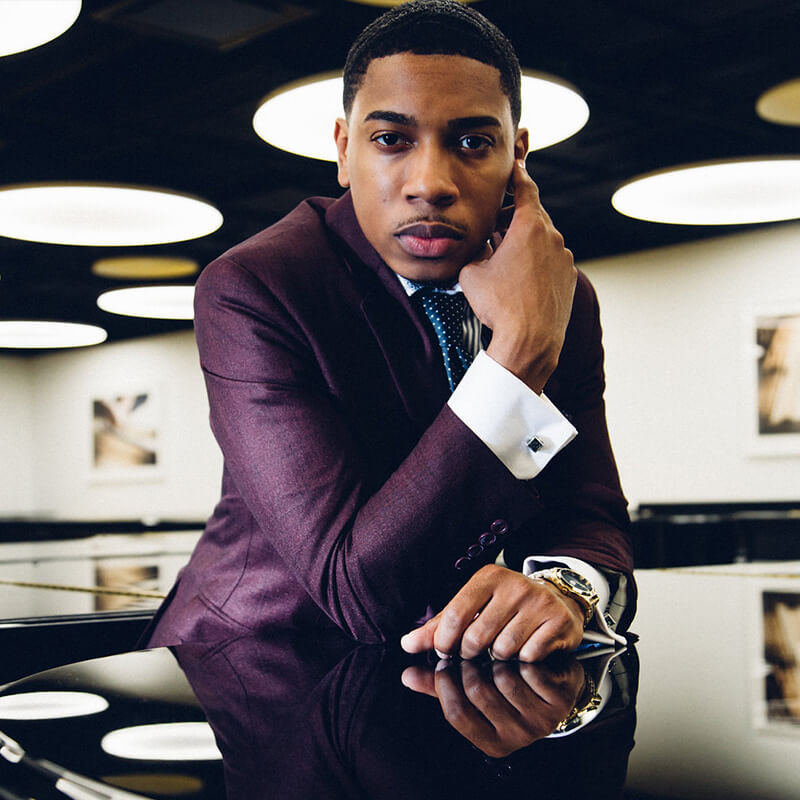 Christian Sands — Steinway Artist and five-time Grammy Nominee — is an emerging jazz force. His abundant piano technique perfectly matches his conception, accomplishing a much deeper musical goal: a fresh look at the entire language of jazz.  Christian says, “My music is about teaching the way of jazz and keeping it alive.”  Whether it’s stride, swing, bebop, progressive, fusion, Brazilian or Afro-Cuban, Sands develops the past while providing unusual and stimulating vehicles for the present… and for the future.  He expresses himself through an extensive vocabulary of patterns, textures and structures, all the while maintaining a strong sense of understatement, sensitivity, taste and swing — hallmarks for as long as he has been playing.

On his stunning new album, his third for Mack Avenue Records, “Be Water”, Sands takes inspiration from water’s tranquility and power and muses on the possibilities offered by echoing its fluidity and malleability. Through ten gorgeous and thrilling pieces, Sands alternately conjures the serenity of a sun-dappled lake and the drama of a relentless thunderstorm. Release date is July 17 2020.

The power and prowess of his playing has taken him from the Kennedy Center in Washington, D.C., to the world renowned Newport Jazz Festival, Monterey Jazz Festival, Detroit Jazz Festival, to New York’s celebrated jazz clubs such as the Village Vanguard, Jazz Standard, Blue Note and Dizzy’s Club; to international jazz clubs all over the world.

From a very early age, Christian possessed an insatiable appetite for music.  He was enrolled in music classes at age 4 and wrote his first composition at age 5.  He started playing professionally at the age of 10, and studied at the Neighborhood Music School and the Educational Center for the Arts in New Haven, CT.  He received his Bachelor of Arts and Masters degrees from the Manhattan School of Music.  For his participation on the MSM “Kenya Revisited” album, Sands received a Grammy Nomination for Best Latin Piano Solo.

His meteoric rise in the jazz world already includes performances with the legendary Oscar Peterson and Dr. Billy Taylor.  He met Dr. Billy Taylor at the Jazz in July program in 2006, and formed an immediate connection.  Dr. Taylor dubbed him his protégé, and Christian has followed in his mentor’s footsteps by encouraging, inspiring and advocating for the preservation and history of jazz.  He teaches and promotes the passion and richness of jazz to young people as well as to mature audiences.  In 2015 he started the Jazz Kids of Montmartre in Copenhagen, Denmark, and he also teaches at Jazz in July, where he is an alumnus.

A deeply rich and soulful feeling can be heard in Christian’s music, characterized by his infectious energy and spirit.  It was that same spirit that caught the attention of Grammy award winning bassist, Christian McBride, who asked Sands — then 20 years old — to sit in at the Village Vanguard with his big band, Inside Straight.  That appearance led to Sands becoming a member of bassist Christian McBride’s Trio, with whom he has toured throughout the world.  Their 2013 CD release, “Out Here,” received a Grammy nomination for Best Jazz Instrumental Album.

Christian provides a soulful melodic touch on S. Epatha Merkerson’s documentary, “Contradictions of Fairhope,” a soundtrack recorded with McBride.  Sands was named one of the future rising stars by Wynton Marsalis in Jet Magazine.  Vanity Fair’s “Jazz Youth-Quake” also named him as a future jazz star.  He was finalist for the 2015 Cole Porter Jazz Fellowship Award sponsored by the America Pianist Association.

An in demand composer and arranger, he appeared on six albums in 2015 as well as releasing two live recordings: Christian McBride Trio “Live at the Vanguard” and his debut recording in Denmark “ Take One”  Live at Jazzhus Montmartre Copenhagen with drummer Alex Reil and bassist Thomas Fonnesbaek, which has received national and international rave reviews.

Pianist Christian Sands invents and re-invents himself with sonorities which define each moment, rhythms which impel his music forward, structures which are surprising and fascinating — and never for a moment un-musical.  He personifies the rising musicality and spiritual aspirations of a singularly gifted musical soul.  “To whom much is given, much is expected.”  Christian Sands doesn’t disappoint.

“When I first met Christian in 2009, it marked a seminal moment in my career as a bandleader. He was the FIRST young musician I’d met who had the drive, passion and skill of my peers like Roy Hargrove, Eric Reed, Greg Hutchinson and Antonio Hart. He’s only worried about being the best musician he can possibly be. He’s the ultimate professional” — Christian McBride