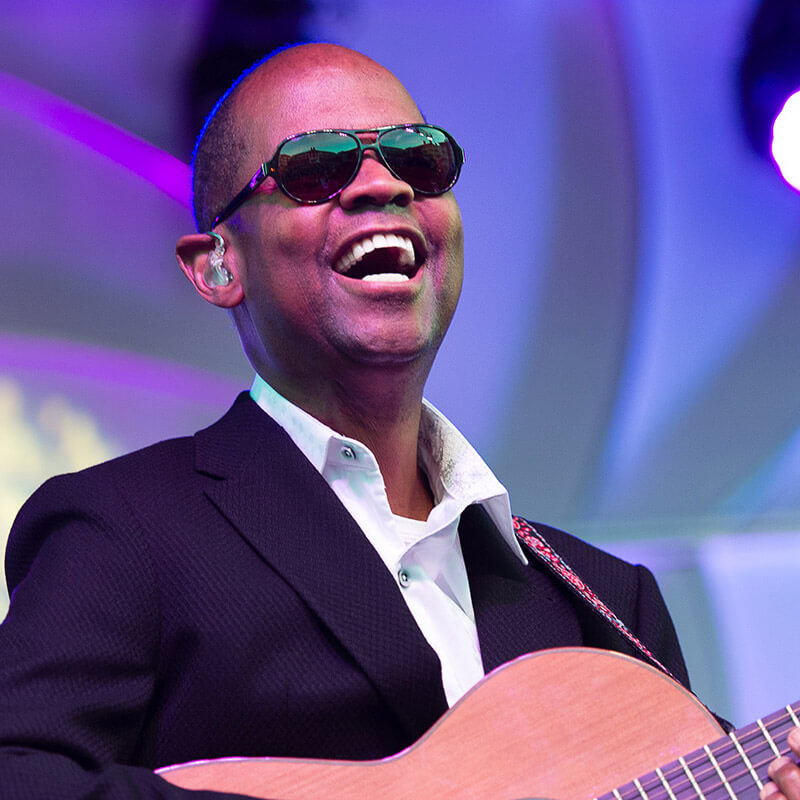 In a career spanning almost 5 decades, GRAMMY®-winner Earl Klugh began his professional career at age 16, when renowned flautist and saxophonist Yusef Lateef heard him practicing in a small music store where the young guitarist worked while in school. That led to an invitation to record with Lateef on his 1970 recording Suite 16 where Klugh performed on “Michelle.” The following year he appeared on fellow guitarist George Benson’s White Rabbit album. He then joined Benson’s group and stayed for over a year before taking a brief, two-month spin with pianist Chick Corea’s highly charged Return to Forever band. All of that carved a path to Blue Note Records and at age 23, Klugh’s first, self-titled album was released in 1976. The rest, as they say, is history.

The Detroit-born master of the classical guitar has become one of the most imitated icons of the instrument and has been referred to as one of the key progenitors of what is often called contemporary jazz. Widely recognized as a guitarist with impeccable technique and one of the greatest guitarists in the world, Klugh is an equally prolific songwriter and producer. Composing over 250 songs, he has released over 40 records, 18 of which earned their place on Billboards Top-200, 24 have charted on Billboard’s Top-10 list of jazz albums and 6 Albums have made it to the No. 1 slot. Klugh’s recordings have received 13 GRAMMY® nominations (including one for his latest release, HandPicked) – and his collaboration with pianist Bob James, One on One, walked away with the 1980 GRAMMY® Award for Best Pop Instrumental Album.

The guitarist’s magic on stage has delighted audiences across the globe. Whether performing solo, with his quartet, electric band, ‘Little Big Band” or with renowned symphony orchestras, Klugh is a master alchemist, turning nylon strings into pure musical gold. As he notes, “The essential excitement of music-making is renewed in every studio and stage performance. Once I get into the actual song, I try to go back to what made me write the song or decide to perform it. I try to keep myself in an open mind, so I don’t reproduce the record but instead create a live performance at that moment. I play it for myself as if it’s the first time I’m doing it.”

As a composer and songwriter, Klugh’s credit appears on a wide range of recordings from artists such as Aretha Franklin, Jamie Foxx, Roberta Flack, Mary J. Blige, Kenny Loggins, Al Jarreau, Toni Braxton and many others. He has been a guest artist with musicians from Jimmy Buffett, Vince Gill, Chet Atkins, Stevie Wonder, Loggins, and Brenda Russell to jazz masters Miles Davis and McCoy Tyner and more.

Seventeen years ago, the guitarist was asked to bring jazz back to The Broadmoor Hotel and Resort in Colorado Springs and Earl Klugh’s Weekend of Jazz was born. In 2010 the guitarist added a second, east coast edition, Weekend of Jazz at Kiawah Island Golf Resort in South Carolina. Both properties are Forbes Five-Star, AAA Five-Diamond rated resorts, where Klugh enjoys spending time with the fans morning, noon and night. “The fans always amaze me,” he says. “So many have shared stories and memories of what my music and Weekend of Jazz has meant to them. It’s the most wonderful compliment I could ever receive. Weekend of Jazz is my favorite time of year!”